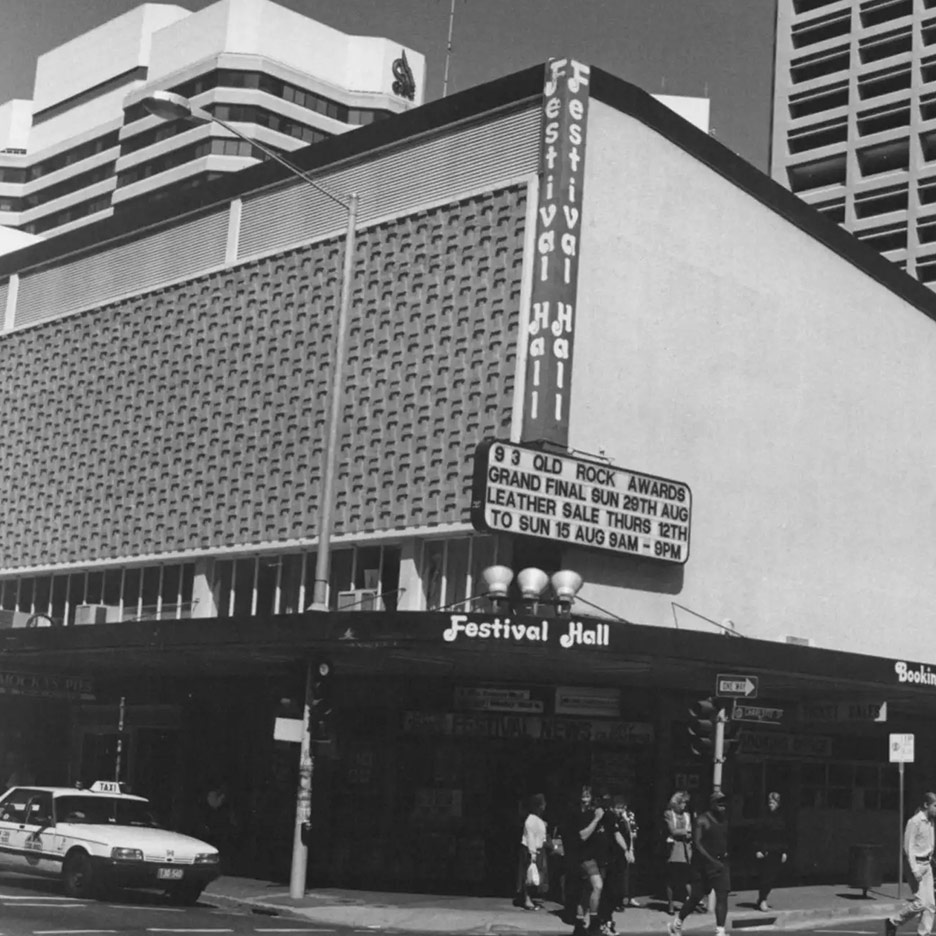 The architectual style of Brisbane’s long-awaited replacement venue for the demolished Festival Hall will fittingly pay tribute to the older buildings of the city demolished in the 1980s.

The design features of Fortitude Music Hall, now being built on Fortitude Valley’s Brunswick Street Mall on the site of the old Optus Centre, were unveiled on Wednesday. 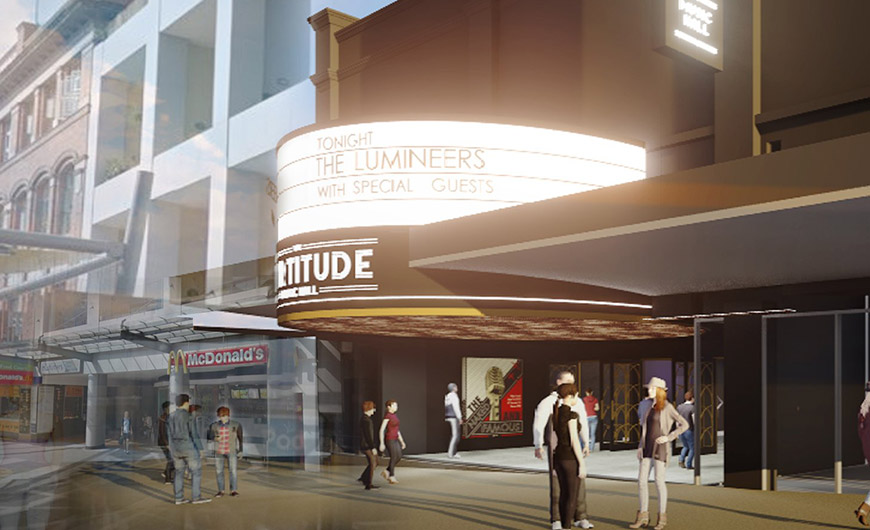 Former Powderfinger bassist John Collins, who now runs the Triffid music venue at the Newstead end of the Valley, has been part of the project to replace Festival Hall, along with developer Scott Hutchinson.

Festival Hall was on the corner of Charlotte and Albert streets in the CBD and was demolished in 2003. The live music scene in Brisbane never recovered.

“We drew inspiration from all the beautiful art deco theatres and venues that existed in Brisbane and were torn down in the ’80s,” Collins said.

“Cloudland, but just in general the older buildings around Brisbane that were knocked down. 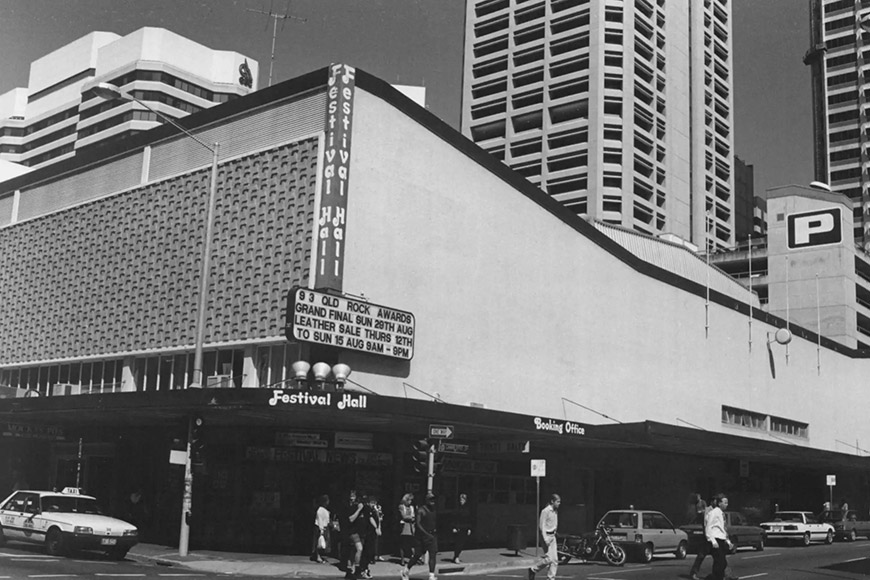 “So the idea is to just create that sort of feeling.”

Collins said he went to the United States earlier this year to investigate venues.

“I really liked Radio City Music Hall, so that’s where the idea of the Fortitude Music Hall comes from as well.”

The first look at the artwork released on Wednesday morning suggests the famous Fillmore theatres in Philadelphia and San Francisco as much as Brisbane’s Festival Hall.

“We felt incredibly inspired by the Philadelphia Fillmore,” Collins said.

“Not just due to its similar dimensions and size to the building we have here in Brunswick Street, but the way it honours the historic traditions for music halls and local musical heritage, which is our aim, too.”

Inside the venue, with a capacity of 3300 patrons, will be a tiered upstairs mezzanine level so everyone can see the performers.

The venue will include a mix of retail and special events spaces.

Philadelphia’s Fillmore is essentially three venues in one: a 2500-capacity main room; a 450-capacity “club within the club” and a smaller venue for up-and-coming local artists, DJs and smaller touring bands.

In Brisbane, the Fortitude Music Hall will be two venues, Collins said, but different to the Philadelphia model.

“There will be a small venue within the venue that will be operating five days a week, but it won’t be operating at the same time as the main venue,” he said.

“I really liked the mezzanine floor there. It will be a ground floor and then a mezzanine that wraps around. That mezzanine level will be tiered.

“What we are trying to create is a venue where the 3000 people can see the band. Sometimes in mezzanine floors when you get three or four deep you can’t actually see the band.

“So there will be four levels on the mezzanine and then downstairs it will have a basic floor, but also some tiered seating at the back and against the walls.”

Fortitude Valley had for five decades been the hub of live music in Brisbane, hosting a mix of live venues that spawned thousands of small bands, as well as bands that made national and international waves, such as the Saints, Powderfinger, the Go-Betweens, Regurgitator, Railroad Gin, Razar, Ball Park Music and Violent Soho.

Collins said replacing Festival Hall, which had provided Brisbane’s main link to touring bands from 1959 until 2003, was always the dream of the partners. 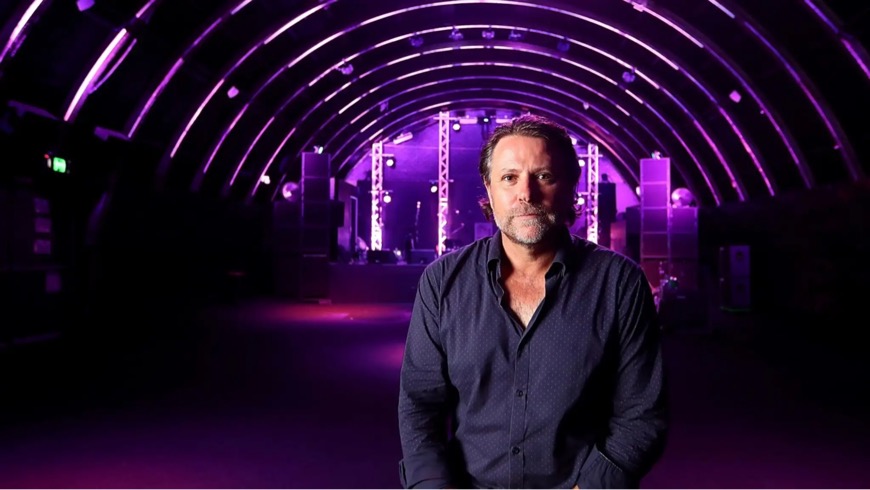 And he expected Brisbane bands to feature heavily.

“Obviously for me I will be looking for a Brisbane feature, a Brisbane-related idea,” Collins said.

“There are a few bands that will fill that space, so hopefully I will be talking to some of those guys.”

That led to the obvious question – would his own band, which has been in hiatus since 2010, feature?

“I think I’ll leave Powderfinger out of this one,” he said.